Ted Cruz battles with Chris Wallace and it wasn’t purty. Christie endorses Trump with the joy of political opportunism. Tune in for this summary of the Sunday political talk shows along with my take on things.

It was with Chris Wallace that Ted Cruz did a most abominable job of an interview, goodness, Cruz is my guy but after this interview I am skeptical. 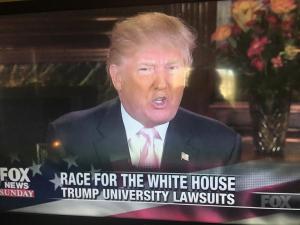 First Trump was interviewed by Wallace and nobody would say Wallace was easy on Trump.
Wallace asked him about the ongoing court case with Trump University and some pathetic story about Polish immigrants sleeping on a Trump construction job some 30 years ago….go on.

Trump stated that Marco Rubio and Ted Cruz are in cahoots, that he saw them shaking hands before the last debate, that they are the dreaded establishment.

First, don’t they all shake hands before events such as debates?

Second, Cruz comes on and he’s going on and on about all kinds of stupid stuff that Donald allegedly did.

More than notable was how rude and sarcastic Cruz was with Chris Wallace, not that Wallace is my hero or anything but he gave a fair interview that Cruz didn’t like and that’s the short of it.

We had some Bernie Sanders on this show and God bless, crazy Uncle Bernie was all over the place apologizing for his awful South Carolina showing.

All of the big players of the week were interviewed but nothing terribly new in any of it.

Political Cartoon of the Week

On ABC’s This Week, it was more notable by the revelation made by this Sunday political talk show’s round table.

Because one of the pundits revealed something very interesting. Seems, as alleged, that 8 to 10 HOUSE Republicans have said that they will in no way support Trump as the Republican presidential nominee.

I thought once the people nominated their candidate via the primary process that all the party is supposed to support the guy?

And now we are to understand, however secretly, that almost a dozen HOUSE Republicans are whispering a vow to not support Trump?

NJ Governor Chris Christie, famous this week for his recent endorsement of Donald Trump as the Republican presidential nominee.

My thoughts on Christie in MY TAKE.

Giving Greta Vansustern credit, while co-members of the This Week round table, she at least said that no matter what the elected elite felt about Trump, EVIDENTLY THE VOTERS WANT HIM!

You go Greta. Somebody’s got to speak the obvious.

CNN’s State of the Union 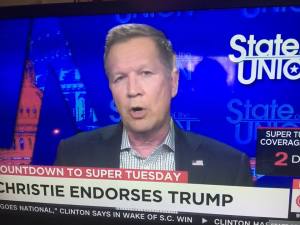 Ohio Governor John Kasich was guest on this show and he was arrogant and rude, as always.

Kasich did make a couple of very rigid statements on this show.

Kasich said he will either win the Ohio primary or he will drop out. In addition, Kasich admitted that he will support whoever the primary presidential Republican winner might be.

We’ll be watching that Kasich adheres to this promise.

Come on. If ever there were a political opportunist, whether it’s kissing President Obama’s butt to get federal money or snuggling up to Donald Trump for a possible VP slot, it exists in the form of Chris Christie.

Christie waffled, spit and salivated over his confidence that The Donald will build that Mexican wall, that given time Trump will make Mexico pay for it, that his former money person, one Meg Whitman, was pathetic with her public disapproval of Christie’s endorsement of Trump.

But Christie is ambitious, if not an especially loyal person.

The most surprising food item in the buffet line at Ocean City Maryland’s Bonfire restaurant might fool those who attend just for the crab legs. Tune in for this review of a great buffet, what to take, when to go, items to eat.

What Ben the Bachelor did after the hometown dates was kind of mean. Tune in for an update and some guesses as to who might be Ben’s new wife.

Please feel free to email me at patfish1@aol.com if you want to send me a special comment or have any ideas or information you want to share.